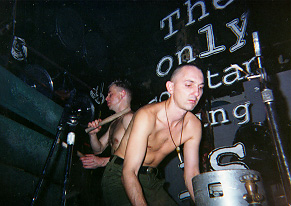 Jester: This is your first tour in almost ten years in the United States? How have you been received on the first half of the tour?

Graham: Yes. The purpose of this tour is to rebuild what we made ten years ago and then lost. We can't really expect it to be like it was ten years ago anyways. It has been working out rather well so far.

Jester: Has much of it has been because of Martin Atkins at Invisible Records?

Graham: He is the main reason why we could come on tour. He has a tremendous amount of energy that he can put into a band like us.

Jester: In the entire lifetime of the Test Dept. project, you've used percussion, classical, and ethnic instruments. For the past several years you have begun to use computers for much of your music. What sparked that change? 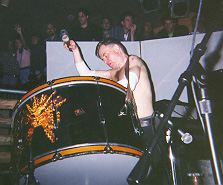 Graham: We have also used electronics for years. "The Unacceptable Face of Freedom" was the first album where it was written entirely on electronic devices in the studio. I do think that we depend more on sequences now than we have in the past, which is probably what you notice the most. We got into it because so much of the new technology has become readily available and cheap. Our music has developed into new areas simply because things that were never possible to write before are suddenly becoming possible with the advent of all this technology. So whenever we try to write new material we want to use everything possible to write music as we can.

Now when we play live there is a mixture of live heavy percussion with sequenced and sampled material. It is weird to mix such diverse musical styles together, yet it allows us to smear the lines between both styles, which we enjoy greatly.

Jester: Surely you didn't bring all of these drums, and homemade musical instruments all the way with you from England. Where did you find all of your material?

Graham: A couple of us came over a few days before the tour and scrounged all over Chicago to find the right equipment. The majority of the instruments were built from scratch here and will be left here when we leave. Although we might take some of the better pieces back with us or leave them in storage.

Jester: Are you in the process of working on a new Test Dept. album or are you more focused on your tour right now? 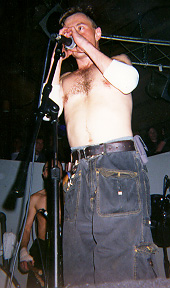 Graham: At this moment in time we are focusing totally on the tour but when we get back we will be working on a new album. In the meantime we are releasing a single in Europe which consists of remixes of the Genius track from Totality.

Jester: The majority of your music is extremely politically oriented. When you sit down and write your music from what sources do you draw your most inspiration?

Graham: It has changed over the years. The music that was influenced by the worker strikes in England was focused more on direct political manifestation. Things have changed in the past ten years and most young people simply do not have a true awareness of the world around them any longer. So we moved away from pointing out direct political issues. The music now talks more about the music itself and more personal influences. We live in a multicultural society and the music reflects that. We try to take musical pieces from different cultures and put them together into something everyone can understand. The more borders we can break down within ourselves the better. We are trying to explore our inner selves and go outwards from there towards the rest of the world.

Jester: Is England still a frustrating political environment to live in?

Graham: For the most part yes. Both political parties are no longer based on issues or ideology. They will change their platforms at a moments notice just to garner a vote. We are left mostly without any type of political choice whatsoever these days. We desperately need change. 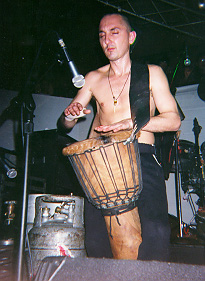 Jester: What would you consider the strongest outside influence on you music?

Graham: We don't have one single influence. We are influenced by the entire world around us, what is going on, what we see everyday.

Jester: Going back a little bit, how did you first get involved with composing music and releasing it to an audience?

Graham: It all started with Paul in the seventies with experimental music. Then we started getting involved with other music that was becoming popular at the time. During the eighties there was Punk, House, and whatever other music that became a commodity. We wanted to make a direct statement about social issues early on. Using music and rhythm was the easiest way to speak our minds on any given topic.

We didn't have any money when we started so we used whatever we could find as instruments. They were pulling down all the working class factories near where we lived at the time so we acquired anything that could make noise. We just wanted to make music and release some of the frustration that came from living in that period in history. We wanted to make very direct confrontational music that used ideas driven from deeply rooted social and political issues.

Jester: What is it like to play in small clubs and venues as opposed to playing some larger shows in England in places like demolished train yards. 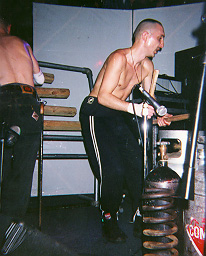 Graham: It is kind of fun, but we have always played small shows along side the large one-time events. Even though we haven't been here in a decade, we have still been playing small venues like this all over Europe. We look at all our performances as equally balanced. They are just different forms of expression. Obviously we can't play a large performance on tour so we have to come up with a separate show which we design in the studio for small venues. These small shows allow us to get into closer contact with people. The newer material is more focused on interacting with the audience and allowing them to listen to our material again and again as opposed to a single unique event. Both events are equally exciting.

Jester: Where do you see Test Dept. going in the future musically?

Graham: I am not sure really. Obviously continuing to experiment and encompass concepts from all different cultures around the world. Music is a constantly evolving thing. At the moment in England, primarily London, musical styles are changing every two to three months. Unlike here, when you goto a club you see people from all different cultures listening to all types of music. There is so much musical material coming out of London right now because of that cultural diversity.

The new album will definitely be quite experimental with new styles of mixing and ethnic elements. Our sound man is now a permanent member of the band and he adds new musical elements and vocals from the board during the show. We are all very much into exploring new territories of sounds. 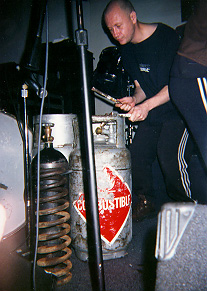 Jester: What do you think has caused such a musical and cultural diversity in England in the past ten years?

Graham: There is probably no greater mixture of cultures in the world than in London at this moment in history. The ghettos are such a mixture of cultures. I live in Brixton, which was the main West Indian area of London. There are lots of people from all over Europe in this tiny section of the city. It has allowed all of the cultural pockets to mix themselves up.

Jester: Do you think this has a lot to do with British colonialism?

Graham: Definitely. It started in the fifties and just started to explode in the past forty years. The London culture has developed quite unlike any other urban culture because of the British presence in countries all over the world. It has created musical clubs that have some of the bizarrest musical mixes played next to each other. It does a great job of removing all musical preconceptions from a person.