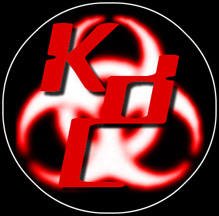 
Jester: Can you briefly introduce yourselves and explain your role in the band?

Ryan G: I am the lead vocalist.

Roger: I play keyboards and write most of the music.

Jester: Kevorkian Death Cycle has been very quiet on the scene since 1996. What were you up to?

Ryan G: We have been busy trying to get this album released. It was supposed to be released on Ras Dva Records, but the release date was continually pushed back. Once we moved to Metropolis Records, they released it almost immediately.

Roger: We got in touch with Metropolis Records through our management after we toured the East Coast during the Fall of 1997.

Jester: The working title for "Dark Skies" was "Babylon" which are both tracks on the new album. Why the title change?

Roger: Time and the title of the new Rolling Stones album "Bridges to Babylon". We had our hearts set on "Babylon" for so long and changed our minds at the last moment. "Dark Skies"ended up fitting the overall mood of the album better.

Ryan D: As a band we decided that the imagery of the album cover was better suited for the title "Dark Skies". The artwork was thrown together in twelve hours by my friend Caleb and I. Metropolis contacted us with a deadline for the artwork. If we met that deadline we could submit the artwork by a certain date, the CD's would be pressed on time for the tour.

Jester: What can we expect from tonight's live performance?

Ryan G: We have two keyboardists, myself on vocals and a full drum kit. The keyboards will fill-in some of the guitar parts you hear on the album. We do not have a live guitarist for this tour.

Jester: "Dark Skies" is a much more polished album. Was that accomplished through new equipment, production techniques, or something else?

Roger: All of the above. You also have to consider that "Collection For Injection" was written between 1989 and 1995. I was a teenager through most of the music writing process. Of course the new music is going to sound more polished with all of the experience I have accrued.

Ryan G: We also worked on cleaner vocals. I can create the effects and distortion without technology, so why use it? My voice is so fucked up that I don't need any help making it sound worse.

Jester: The liner notes for both albums mentioned Siebold from Hate Dept. Has he had any influence on your recording style because of his production technique?

Roger: When we record with Steven, he plays less of a role than other engineers. He sits back and lets us do what we want musically.

Ryan G: However, he is a very technical engineer. Our sound is always very clean and professional when we record with him.

Jester: "Dark Skies" seems to contain a multitude of hidden religious and alien references. How do you link these two themes together?

Ryan G: I wouldn't consider it as much religious as it is spiritual. There might be a few bona fide religious references due to my upbringing. However, I think most of those themes appeared on our first album.

Roger: As far as the aliens are concerned, we were unaware that there was an extraterrestrial inspired television show called "Dark Skies."

Brett: As far as the religious and alien references are concerned, I think that Ryan was trying to write a very personal album. A lot of the lyrics he writes are influenced by spiritual issues and the alien people among us.

Jester: What is your favorite track on "Dark Skies"? Why that song?

Roger: 'Tempest'. That track stands out more than the rest. There was a great deal of emotion present when I wrote the music for that track.

Ryan G: 'Dark Skies' because it explains a lot of things to me that I didn't understand before I wrote the song.

Brett: I enjoy 'Babylon' because it is a song about Ryan and 'Prisoner' because it is about being stuck somewhere. Both songs contain more dynamic elements than I am used to hearing and we as a band are used to performing.

Ryan D: I also enjoy 'Babylon'. Every song paints a picture and that song paints a very powerful picture in my mind when I heard the lyrics and the music together. The imagery is very epic and vivid in my mind.

Jester: Do you any of you have any formal musical training? Has this helped or hindered your music writing process?

Brett: To my knowledge, I am the only person who has any training. I still receive drum lessons regularly and find them useful every time I perform.

Roger: Actually, I took piano lessons for several years as a child. I never apply any of the musical training I had. However, it did motivate me to try to program music with synthesizers.

Ryan G: I took piano and guitar lessons between the ages of eight and eleven. I also went to college for guitar for a short while. The training really never enters into my mind when I write lyrics for the band.

Jester: Has the Internet helped or hindered your musical success?

Ryan D: Yes. I continually get e-mail from the web site which I manage. We put CD quality sound files on the Internet for our fans. We even made the MP3 site of the day once which brought a great deal of new traffic to our site.

If all goes as planned, our next album will contain a full interactive experience for our fans. A lot of the band interactive CD-ROM's are not interactive. I want to move away from the point and click mentality of these programs.

Jester: What is the title of the bonus track on "Dark Skies"? Why did you decide to make it a bonus track?

Ryan G: The title of the track is 'Descension'.

Roger: The track was written one night in the studio very spur of the moment. We were all really wasted and thought the track was going to sound horrible but it turned out rather well.

Ryan D: I wasn't present when it was written but I heard a few stories about banging on a piece of sheet metal with a rake during the song.

Jester: What does the future hold for Kevorkian Death Cycle?

Roger: From this point on there will be a lot of work for us to succeed.

Ryan G: We are going to go home, rest a bit and start recording again. We also are hoping to perform a few West Coast shows and a tour next summer.